“20 hours to build a template!? You don’t know what you are doing!”

“Only 8 hours to build that template!? You don’t know what you are doing!”

From the quotations (and hourly quotes) above you can see that HubSpot developers really have a hard time winning with marketers. Quote too high and they risk losing the job because someone thinks they’re over-complicating things and trying to pay rent off one template. Quote too low and they risk losing the job because people think they’re over-simplifying and not smart enough to do the job. In this blog post we’ll discuss what might be behind each quote and how to properly evaluate HubSpot development quotes. 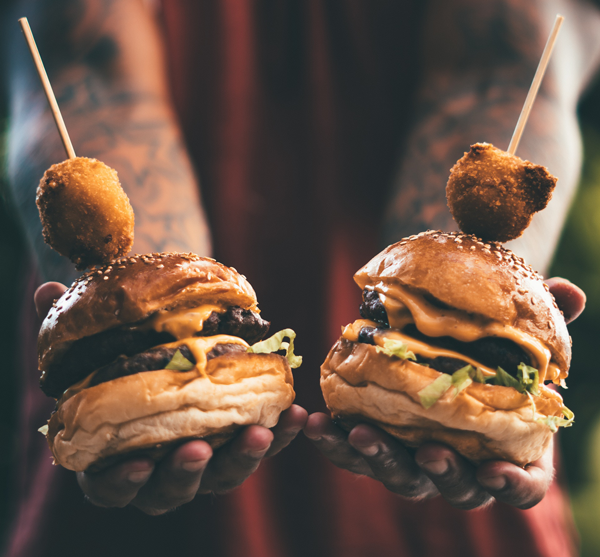 Before starting, it’s important to note that there is nothing wrong with either quotes.  As a marketer, you need to understand that just because someone quotes 8 and the other quotes 20 doesn’t mean the developers are the sleazy car mechanics who charge $200 to change the oil in your car. Think of it more like two different burger chefs.  A Big Mac at McDonalds might cost $7.99 and a burger at Michelin 5-star restaurant might cost $79.99. Both might end up tasting great at the end of the day. Both establishments have expertise in making burgers. Same probably holds true for the HubSpot developers quoting your template builds. Keep this in mind as we discuss the differences between the two quotes.

If you want to create a better understanding between a designer and a developer, then prepare your mockup in a way that talks about design for the designer and functionality for the developer.

See the detailed and correct Designer-Developer Handoff process that translates the designs in the developer’s language.

The story of designing the mockup doesn’t end with the handoff. The plot thickens when you, the marketer, get quotes ranging from 8 hours to 20 hours for the same design from two different developers. In the first instance, 8 hours seem pretty good as it might reflect that an experienced developer would finish the task quickly and seems budget friendly as well. However, it could also mean a different technique that gets you a developed template faster but might not be what you want.

In HubSpot template development tasks, timing comes down to several factors including, the approach of each developer, the complexity of the design and the process of project undertaking and delivery. among others.

“Maybe the developer who quotes 8 hours was doing work on that project already and knows about the global header and footer modules.” Said Aamir Aslam, a senior HubSpot developer at Computan. “The rest of the things may not take too much time to develop the mockup and hence the 8 hours quoted.

So according to Aamir, having experience on the job already can help speed things up.  You know how things were coded, why things were setup the way they were and know when and where the repercussions to making changes will be.

But if you don’t know what’s and how’s of the code already, then you need to account for it. “On the other hand, the other developer who quotes 20 hours might not have a history with that client (the developer wouldn't know whether they have header and footer in their portal or not).” Aamir added. “So, the developer will assume they need to build those and include the rest of the time for those global groups and styles.”

Let’s elaborate those points and discuss other factors that might be behind the logic of the two quotes.

Developers that Pitch an 8-hour Proposal

New Customer Discount – A developer, contractor, freelancer might quote a low amount of billable hours if they are just starting out on their own or looking to build a good client-base. It might take them more time that they’re inheriting on their own and not passing on to you.  Which isn’t a problem obviously! Again we’re evaluating based on what we’ve seen in the market.

Less modules, more static elements – In this case, the developer might code sections that are only editable through the Design Manager and Source Code.  Again, no problem with that if the template needs to be done in a rush and on a budget.  The trade-off there is that the template will be quite difficult for non-developers to edit. So, you’ll need developer support in case you need editions to the template in the future.  You also won’t be able to easily drag and drop sections on this template as HubSpot modules as they’ll be static elements. With marketing it’s often better to be live than be perfect...that’s certainly the mantra for anyone looking for speed and budget over flexibility. No problem with that at all either.

Experience counts - The developers who have worked on the website earlier might quote less as well because they already know exactly where the tweaking is needed in the global modules to be used on the new template.  Again, perhaps the customer is on retainer with them and might quote less billable hours to get something done provided they know the full situation and where things are.

Below are some reasons why someone might pitch 20 hours:

Different understanding/misunderstanding of the task - The developers pitching the 20-hour proposal have interpreted the job differently.  The developer might also have seen if the mockup is missing something or any improvement they can suggest from their perspective.

Added time for other necessary tasks - The 20-hour work proposal might as well include time for testing, optimizing and reviewing the device on different browsers (using Browserstack or something similar) and reviewed the code for speed issues.   Minifying the code is required to increase the page speed and is usually done once the template is developed. All of these are essentials parts of the process of making the page live and do call for a few extra hours of work.

Dynamically Built – Usually the main source of difference. The developer who quoted 20 hours is looking at each area of the design file and assuming it needs to be coded and built as a reusable HubSpot module.  They are assuming nothing in the design or mockup pre-exists in the portal at all. So, in effect you are getting a template and however many modules there might be on that design that you can use/re-use again everywhere else in your portal.

Marketers know how important branding is to a company’s website. So, they are willing to pay more for better branding. Custom modules are developed in such a way that even non-developers can adjust the page if the client wants to repeat the template on another page with slight changes. So, combing the custom coding on the modules, with testing and optimizing code, the 20-hour pitch seem legitimate as well.

Unknown portal/existing module - A developer who has never worked in your portal before might have to grasp the coding pattern of the global modules such as head and footer on the page. So, they count in the hours to look for global groups and styles.

In our opinion, the right way for a developer to build a HubSpot template is to use the drag and drop elements and custom modules built from scratch. The biggest benefit of this approach is that a client can make the changes on the page in the future without consulting a developer first. Catch a fish for someone they eat for a day, teach someone to fish and they eat for a lifetime...unless they are vegan or don’t like fish. Right? 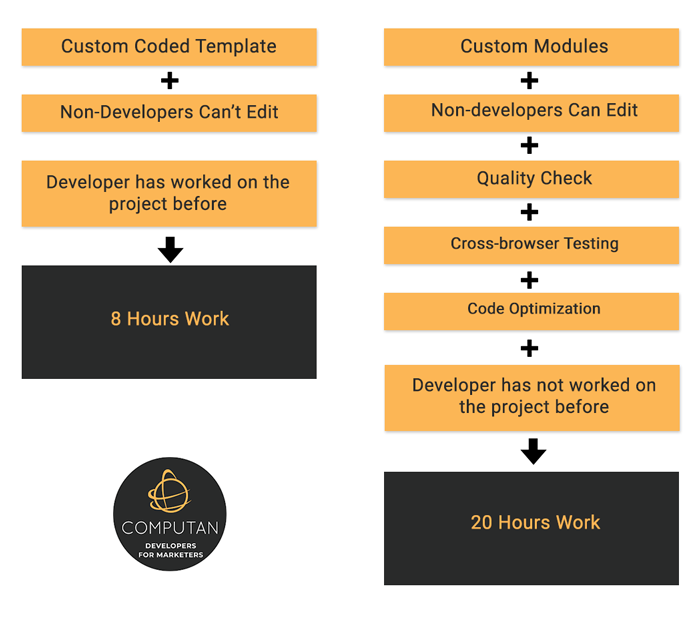 Sajeel Qureshi is the Vice President of Operations at Computan, a digital-marketing and software company. Computan serves as the digital department for numerous businesses throughout the globe, ranging from start-ups to multinationals.

Computan Proud to be Named on Clutch 1000!

At Computan, we focus on helping busy marketing and strategy teams with high quality development and programming. ...

At Computan, We Appreciate Our Customers

According to an industry survey, almost 40% of small businesses choose not to invest in a website. Most expressed that ...